If you’ve ever wondered why there is such a fuss in the wine world regarding the release of vintage Bordeaux, you are likely not alone. That said, those in the know, are part of a cult-like following for what is arguable, the greatest wines on the planet.

Bordeaux does create white wines and a small amount of rose, but it is the reds that garner most of the attention. The reds are created from a shortlist of allowable grape varieties, which mostly consist of Cabernet Sauvignon, Merlot, Cabernet Franc, Petite Verdot, and Malbec. Bordeaux is generally split into two main sections known as the Left and Right Banks. The Left bank, close to the ocean, gets a maritime effect and therefore is best for Cabernet which prefers a cooler climate, and is the dominant grape here. The Right Bank features clay soil, which Merlot thrives in. Most of the famed Chateaux are on the Left Bank except for a few very special ones on the Right Bank. The top chateaux fetch incredibly high prices for their wines and are the cult favorites. The good news is good Bordeaux is affordable at the basic level often known as “Petit Chateaux”.

If you’ve never had a great steak and Bordeaux, you are missing one of life’s little pleasures. You don’t have to break the bank to get started either! The New Hampshire Liquor Outlets have one of the greatest selections of Bordeaux in the nation and you can find a bottle from under $10.00 to, ahem, well, much more.

Come have a look! The newest release of 2017 Bordeaux is here!

Welcome to our ‘Tis the Season December Sale!

Our holiday wine and spirit sale, ‘Tis the Season, features Port, Sherry and Irish Whiskey – just a few of our favorite things! – for 15% off with the...

The Simple Beauty of Simple Syrup

Simple syrup is really just equal parts sugar and water brought to a simmer and whisked until fully incorporated. It can then be fully cooled to room temperature and...

The Legacy of Frog’s Leap

At 40 years old, Frog’s Leap may seem like a relatively young winery, but in the Napa Valley, a lot has changed during that time.   When John Williams, owner, founder and winemaker...

Hey, You Got Peanut Butter in My Whiskey!

The rise in popularity of Skrewball Peanut Butter Whiskey has been fast and furious. Three short years ago, only residents of Ocean Beach, California had even possibly heard of...
Our monthly Email Extras is one of the best ways to get exclusive savings on your favorite wines and spirits. Just enter your email address below!
Follow us to stay up to date on news, deals, giveaways and more!
Tweets by The Tasting Room 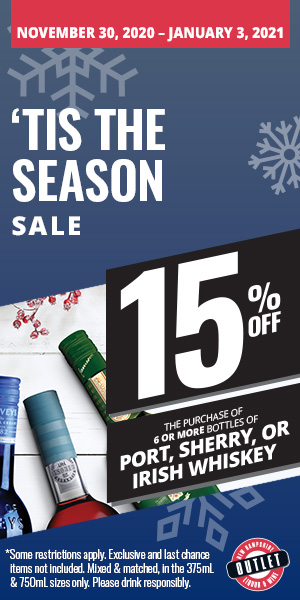