Most rum is made from molasses; a thick, dark sweet liquid, a bi-product from the process of manufacturing crystallized sugar. Rum is produced with variations of fermentation, distillation blending styles and aging techniques.

Learn The Differences Between The Various Varieties:

White or Silver Rum: Ah, hear those tropical breezes? This clear, magical elixir is perfect for cocktails with lighter, fruity ingredients plus a bright, paper umbrella to add a pop of pure joy.

Gold Rum: Ready to kick it up a notch? Golden rums are aged longer than the white variety which means their bolder, amber hues make libations tingle with a steeper flavor.

Dark Rum: Yo, ho, ho and a barrel of fun. From pirate captains to navy admirals, this smooth, medium-bodied rum is long-aged and has a nautical history that lives today in multiple recipes that pay homage to the high seas.

Black Rum: Silky. Sumptuous. Sensual. Like a fine cognac, this bold spirit is sipped slowly during sunset to savor the night ahead. It also fuels multi-rum cocktails with a jolt of its highest proofs.

Boutique rums are often available in limited editions or as limited releases. Luckily for collectors and rum enthusiasts, more of these vintage rums are available to market each year.

Most rums available for sale in the United States are 80 to 100 proofs, or 40% to 50% alcohol by volume. Rum brands which contain higher concentrations of alcohol are often labeled as overproof.

U.S. regulations prevent rums over 155 proof from entering the country under most circumstances, so many manufacturers produce rums in the 150-proof range.

The first distillation of rum took place in the 17th century on the sugar-cane plantations of the Caribbean. Plantation slaves first discovered that molasses, a by-product of the sugar refining process, fermented into alcohol. The drink’s popularity quickly spread to Colonial America. The first rum distillery in the American colonies was set up in 1664 on Staten Island.

Boston, Massachusetts had a distillery three years later. The manufacture of rum became early Colonial New England’s largest and most prosperous industry. Boston rum was quite popular, and was even considered the best in the world during much of the 18th century.

Rum’s association with piracy began with English privateers trading on the valuable commodity. As some of the privateers became pirates and buccaneers, their fondness for rum remained a piece of nautical historical trivia to this day.

Today, rum is distilled in more than 80 countries in countless techniques and dozens upon dozens of flavors. 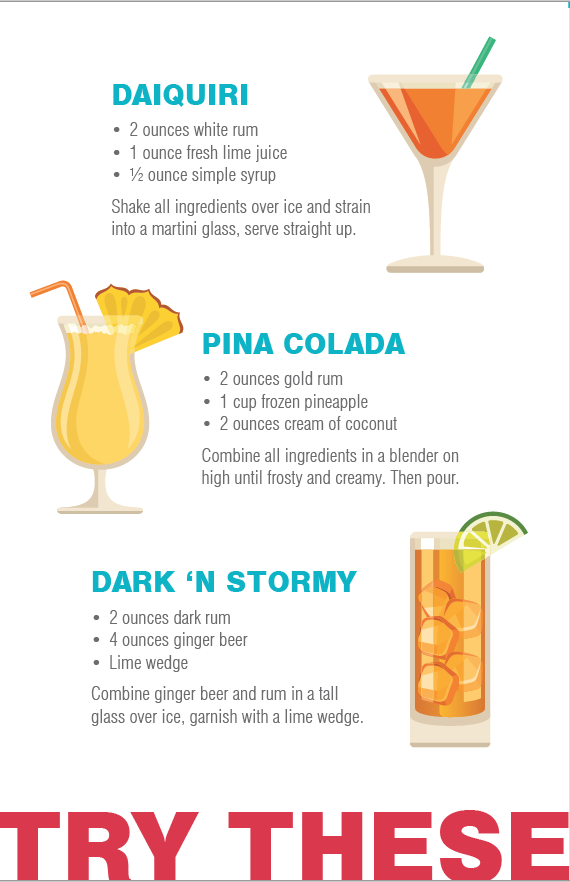 Give These Rums a Try:

Bacardi Superior: Made in Puerto Rico, Bacardi Superior is often described as youthful and passionate. This classic white rum is used in the most popular cocktail recipes. Like most white rums, it is less expensive to manufacture and thus is a great value to the consumer.

Mount Gay Eclipse: Distilled in Barbados from one of the world’s oldest rum manufacturers, this is a brilliant golden amber color enjoyed on the rocks or neat, in addition to being used in cocktails. Like most rums in its category, it is quite affordable compared to older aged rums.

Cruzan Aged Dark: This dark rum is a blend of 2-4 year aged rums in charred oak casks in St. Croix to develop a robust flavor of oak and vanilla for sipping or in one-to-one cocktails. This gold and silver medal winner has been rated as a “best buy” in global spirits competitions.

Goslings Black Seal: This mature black rum retains much of its rich butterscotch, vanilla and caramel flavoring distilled during the sugar crystallization process. Made in Bermuda since 1858, it also retains a soft, elegant finish. 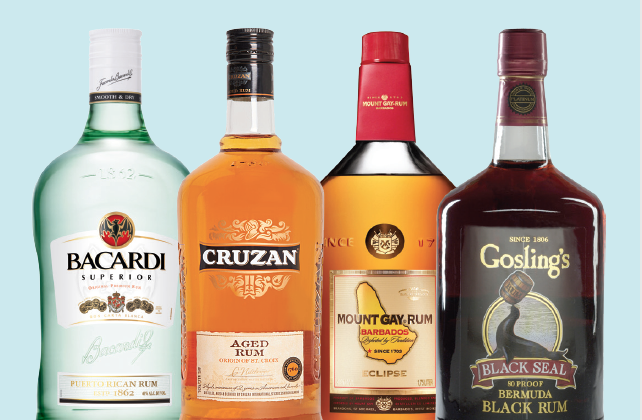