The difference between single malt Scotch and blended is a common question asked by new Scotch drinkers. A single-malt Scotch whisky is often thought to be the product of a simple batch, but it is actually the product of a single distillery. Blended Scotch is the result of blending approximately 65% grain whisky with 35% single malts, sometimes from dozens of different distilleries! Each brand of blended whisky has its own particular flavor profile, and while the grain whisky that goes into it is pretty consistent, the barrels from the individual distilleries all vary. Blended Scotch may also include whiskey from other parts of the world, as long as it is all distilled together it is still Scotch. The difference between the various price categories of blended Scotch–Premium, Super Premium etc.–does not indicate that they contain higher proportions of malt whisky, but that both the grain and malt whiskies are older. This can mean a smoother or a more flavorful blend.

Do you want to learn more about Scotch? Read on.

The History of Scotch

Whisky has been distilled in Scotland since about 1494 and is thought to have been first distilled by monks, who spoke Gaelic. The term “whisky” actually comes from the Gaelic “uisge beatha”, meaning “water of life”. There are 4 main whisky producing areas of Scotland and the flavor profile will vary from region to region. Speyside is the most widely used and is home to The Glenlivet, Balvenie and The Macallan. Scotches from Speyside are unique because of the water used to distill them, but their taste can be described anywhere from light to rich!

Islands Region
The Islands malts are unmistakably powerful from the recognized smokiness apparent in almost all offerings, to the more surprising notes such as the black pepper found in Talisker.

Highlands Region
Known as one of the most scenic regions in Scotland, this land of rugged peaks and heather covered moor-land is geographically the largest of the whisky-producing regions.

Lowlands Region
With little or no peat used in the drying of the malt, the whiskies distilled here are generally fresh and light, fragrant, and floral with cereal flavorings.

Speyside Region
With age, and especially when matured in sherry casks, Scotch from this region evolves to deliver dried fruit and sweet spice flavours. 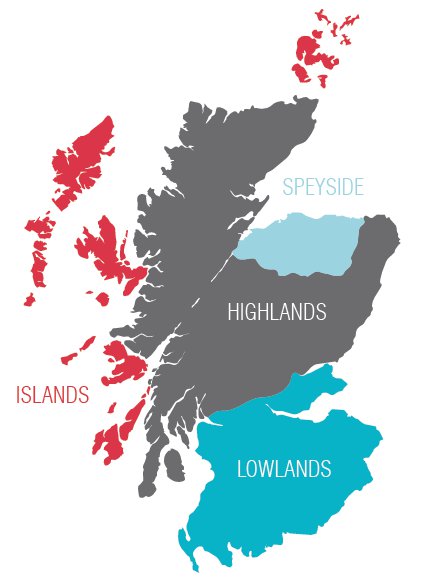 Similar to laws concerning whisky in other countries, what makes Scotch unique is that it is distilled in Scotland. Others differences include spelling, whisky vs whiskey, ingredients and the barrels used. Unlike Bourbon which requires new barrels, Scotch must be distilled in Sherry or Bourbon casks. Scottish law requires that all whisky that is to be called Scotch be aged in oak barrels for a minimum of three years. When any Scotch has an age statement on its label, this indicates the age of the youngest whisky in the blend. There are often appreciable amounts of older whiskies, too.