Crown Royal campaign has generated more than $30,000 for Manchester-based MooreMart in the last three years, along with vital supplies for troops abroad

The New Hampshire Liquor Commission (NHLC) and North American Spirits & Wine Brokerage of New England, A Division of Southern Wine & Spirits, teamed up to provide U.S. troops abroad with more than 10,000 Crown Royal bags, which troops use to store night-vision goggles. As part of this effort, Diageo, Crown Royal’s parent company, presented a $10,000 check to MooreMart, a Manchester nonprofit that delivers care packages to active duty military at no cost. Crown Royal has donated $30,000 to MooreMart over the past three years. This past November and December, customers could donate the embroidered bags that come with Crown Royal bottles at all 78 New Hampshire Liquor & Wine Outlets statewide at any time, including at the time of purchase.

“With 78 NH Liquor & Wine Outlets statewide and strong Crown Royal sales, we knew we could help make a significant impact by providing an opportunity for our customers to donate something as simple as the embroidered Crown Royal bags,” said NHLC Chairman Joseph W. Mollica. “NHLC will always be committed to delivering record revenues to the New Hampshire General Fund, but we are tremendously proud to be able to play a role in this meaningful campaign in support of the courageous men and women defending our country.”

The Crown Royal bags have been a perfect fit for troop’s night-vision goggles, providing protection for the goggles, while saving troops space and weight in their packs. Troops find the military-issued cases for the night-vision goggles bulky. MooreMart, which began as a family effort more than 10 years ago, sends about 1,000 care packages every 10 weeks, and has been including Crown Royal bags in its care packages for about five years. Crown Royal and Diageo expanded the bag collection campaign into a national effort last year, collecting a total of 100,000 bags nationwide for Packages From Home, a national non-profit that donates care packages to deployed troops. Crown Royal plans to collect bags again next year so anyone unable to donate a bag this past holiday season will have the opportunity to do so during the 2015 holidays.

“This partnership between Crown Royal, NHLC and MooreMart has been incredibly successful,” said Jim Adelmann, Diageo’s Director of Sales. “We are happy that our Crown Royal bags are able to serve a meaningful purpose and we are thankful to NHLC and its customers for supporting this great program. New Hampshire was the originator of this program in 2012, so Crown Royal continues to honor the program’s roots by making the additional donation to MooreMart. In New Hampshire, Maine and Vermont, we have collected 20,000 bags combined this year—doubling what we collected last year.”

Along with bags, Crown Royal donated $1 for every Crown Royal bag donated at liquor stores across the country to Packages From Home during the 2014 holiday season – up to a maximum donation of $25,000. It is in addition to that effort that Crown Royal has made an individual $10,000 donation to MooreMart this year. Since 2004, MooreMart has distributed more than 70,000 care packages to active duty military. Every unit from New Hampshire has received a care package from MooreMart and 100% of donations go directly to troops. MooreMart also distributes humanitarian aid to people in need worldwide, including school supplies to local children in Iraq and Afghanistan.

“We are extremely grateful for this support from NHLC and Crown Royal, which makes such a big impact on our efforts to provide comfort and support to our troops abroad,” said Ted Luszey, MooreMart Co-Founder and Director of Operations. “We have received more than 15,000 bags during the last five years to include in care packages, thanks in large part to the efforts of NHLC and Crown Royal.” 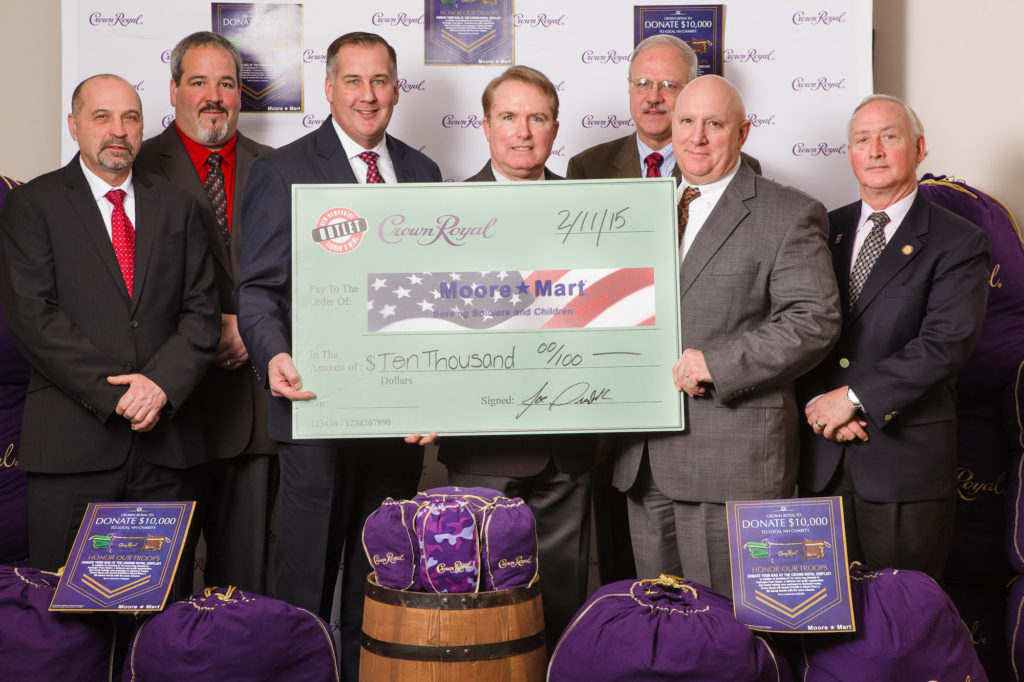