As part of the “750s for Change” campaign, Bacardi USA donated $1 to the NH Food Bank for every 750ml bottle sold throughout February & March 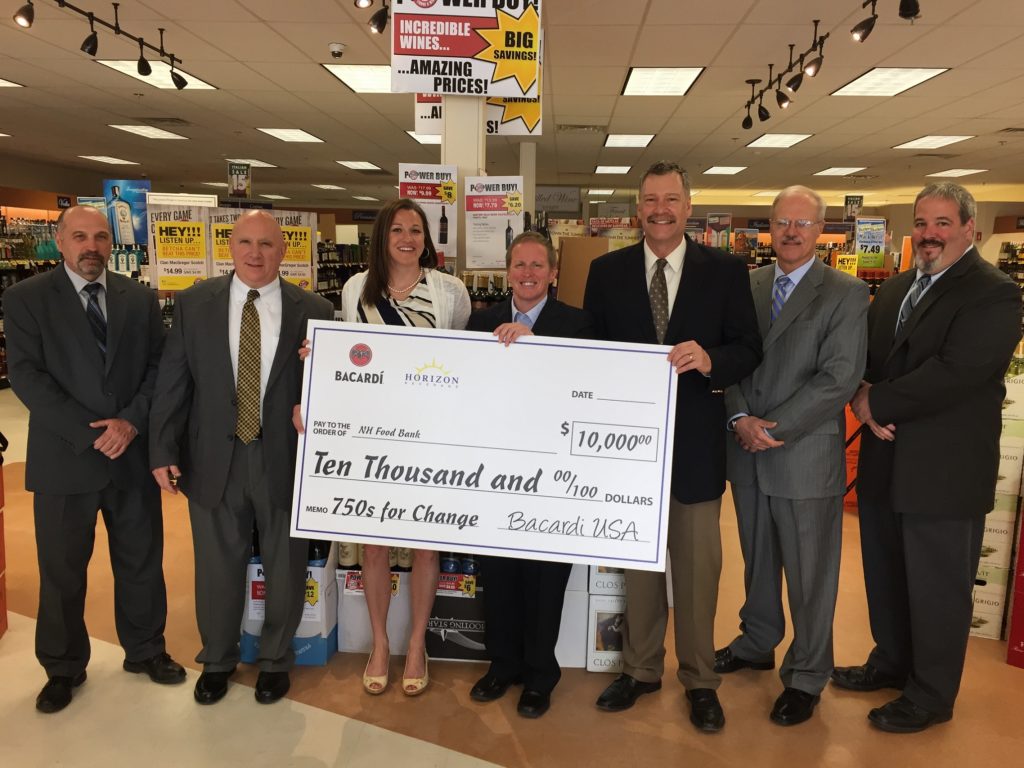 The New Hampshire Liquor Commission (NHLC), Bacardi USA and Horizon Beverage Company teamed up earlier this year on a campaign that raised $10,000 for the New Hampshire Food Bank. In this year’s “750s for Change” campaign, Bacardi USA donated $1 to the NH Food Bank for every Bacardi USA 750ml bottle purchased at any of the state’s 78 NH Liquor & Wine Outlets throughout February and March. The NH Food Bank, the only food bank in the state, strives to provide nutritious food and resources to the more than 143,200 New Hampshire residents who are food insecure, meaning they do not know where their next meal is coming from.

“In raising $10,000 for the NH Food Bank this year, NHLC is extremely proud that the 750s for Change campaign continues to make a positive impact on New Hampshire’s nonprofit community,” said NHLC Chairman Joseph W. Mollica. “Last year, the 750s for Change campaign generated $10,000 in critical funds for the Wildlife Heritage Foundation of New Hampshire. It was our pleasure to once again partner with Bacardi USA to support the NH Food Bank’s efforts to provide nutritious meals and resources to people in need. Along with NHLC’s primary focus of delivering record revenues to the New Hampshire General Fund, we are always proud to support New Hampshire’s nonprofit community.”

Relying on its statewide footprint of 78 NH Liquor & Wine Outlets, NHLC has made it a point to work with its partner businesses to lend vital support to New Hampshire nonprofit organizations. Along with the NH Food Bank, NHLC has teamed with the Animal Rescue League of New Hampshire, MooreMart, Easter Seals New Hampshire, Toys for Tots, and the Wildlife Heritage Foundation of New Hampshire on campaigns raising more than $427,000 during the last two years-plus.

“Bacardi USA proudly supports the NH Food Bank and its extraordinary efforts to help the thousands of people in New Hampshire who do not know where their next meal is coming from,” said Kristen Haubrich of Bacardi USA, which has previously partnered with the NH Food Bank for its “Cocktails for Charity” program, as well as its “Best of NH‐Cocktail Contest.”

The NH Food Bank, a program of Catholic Charities NH, supplies millions of pounds of food annually to more than 400 partner agencies. During 2014, the NH Food Bank reached a record food distribution of 11 million pounds, which is equivalent to 9,166,666 meals; a nearly 30% increase compared to 2013.

“We are extremely grateful to NHLC and Bacardi USA for their support at a time when the need is only growing,” said Mel Gosselin, Executive Director of the NH Food Bank. “More than 143,200 people in New Hampshire are food insecure—including more than 42,170 children. This year, the Food Bank is aiming to increase its distribution by 10% to 12 million pounds of food to meet the growing demand here in New Hampshire.”