Ah, the martini. Few other drinks so easily conjure up images of elegance and finesse as the classic cocktail with just two ingredients. The drink has won many dedicated fans over the years, including actor and comedian Jackie Gleason, who once said, “A man must defend his home, his wife, his children, and his martini.”

Of course the most famous character associated with the martini is James Bond, who created an iconic phrase when he asked for his martini “shaken, not stirred.” The first version of the phrase occurs in Ian Fleming’s “Casino Royale,” and what Bond orders is a Vesper, which is, as Bond tells the bartender:

“Three measures of Gordon’s, one of vodka, half a measure of Kina Lillet. Shake it very well until it’s 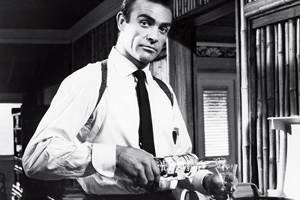 ice-cold, then add a large thin slice of lemon peel. Got it?”

Got it. But the Vesper is not the classic martini, which is has just two ingredients (three, if you add an olive): gin and vermouth.

In the books (and yes, there are people who count these things) James Bond drinks 19 gin martinis in all. In the movies, he doesn’t drink gin martinis, he drinks vodka martinis – 20 of them by one count.

The History of the Martini

The origins of the martini aren’t quite as clear as a martini itself:  The city of Martinez, California claims that it is the birthplace of the martini, while others claim San Francisco is the correct location. Still others believe the name came from Martini & Rossi, a brand of vermouth. No matter which story is true, it does seem certain that the drink originated in the mid- to late-19th century, as recipes can be found in bartenders’ manuals as early as the late 1800s.

But that wasn’t the “martini” we know today (and purists would argue that many of the martinis we know today aren’t really martinis, but more on that later): According to the Martinez, Calif., story, the “Martinez Special” was made with gin, vermouth, bitters, maraschino liqueur and a slice of lemon.

Celebrities such as Ernest Hemingway, Marlene Dietrich and Humphrey Bogart helped fuel the popularity of the martini in later years and in the 1950s and 1960s martinis were all the rage – it was during that era that the phrase “three-martini lunch” was coined. In the 1970s and 1980s distillers stepped up their marketing of vodka and the vodka martini enjoyed wide popularity for a while.

While traditional martinis aren’t as in vogue as they once were, a whole new crop of martinis

has given rise to the popularity of the “martini bar.” However, they are martinis that martini lovers would argue aren’t martinis at all, but rather various concoctions – appletinis, chocolatinis, and Cosmopolitans, we’re looking at you — served in a glass meant for a martini. For purists, the only true martini has gin and dry vermouth, chilled and straight up, with a lemon or olive garnish, and nothing more.

While the classic ingredients remain the same, the proportion of gin to dry vermouth has not: early martinis called for a 1:1 ratio of gin to vermouth. Later it became 3:1, and these days, a very dry martini is about 25:1 – or as the saying goes, “just wave the bottle of vermouth over the top of the glass.”

For those who are aficionados rather than purists, there is a little more room for variation. Add a little olive juice and you have a “dirty martini”; add an onion and you have a Gibson. Substitute vodka for gin or serve it over ice with a twist. Shaken or stirred? A proper martini is stirred, but if you shake it, it may get more chilled – and more diluted. A Gizmodo experiment found a shaken martini was about 10 degrees colder and 46 grams heavier (from the melted ice) than a stirred one. And they found shaking a martini diluted its proof almost in half – which may explain how 007 was able to drink so many martinis over the years. 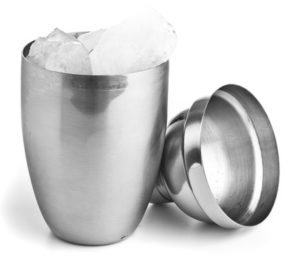 Do you host an adult Halloween party every year? You won’t go unnoticed with these creepy cocktail recipes! Zombie Smash Ingredients ½ ounce gin ½ ounce vodka ½ ounce...
Our monthly Email Extras is one of the best ways to get exclusive savings on your favorite wines and spirits. Just enter your email address below!